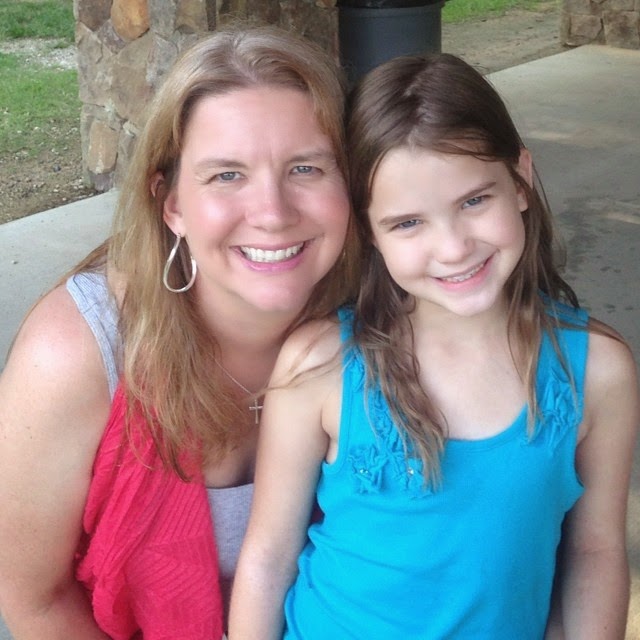 Two days ago you turned 8.  Yesterday you and your best friend treated me to a fashion show and concert complete with dimmed lights, music and shaking hips.  You are growing up so fast, too fast.  I look at you and you're no longer that teensy little girl that needs my help all the time.  In fact, you rarely need my help for anything any more.

So, I want to tell you this: don't let the world change you.  The creativity and imagination that God has given you is astounding.  Sometimes I wish I could see what is going on inside your head.  Keep experimenting.  Keep playing.  Keep cracking jokes and making people laugh.  You told me recently that "being silly is [your] talent."  And you are good at it.  But your memory for all things animal is amazing as well.  And so is your ability to create something beautiful from the simple things around you.

I cannot wait to see what God has planned for you.  I know that right now your plan is to grow up, share an apartment with Rachel and have lots of pets.  Oh, and let Rachel get a job while you stay home and take care of the pets.  But, I'm thinking that God's got something a little bit bigger in mind for you, my love.

I am so grateful that God brought you into our lives.  You teach me to relish each moment.  To focus on the little things.  To ignore the things that don't really matter.  And to laugh. A lot.

I love you to Heaven and back a million times,

Email ThisBlogThis!Share to TwitterShare to FacebookShare to Pinterest
Labels: parenting

Weekly wrap-up - the it's been awhile edition

I feel like it's been quite some time since I've been on to do a wrap up.  So I'll try to do an overview of the past few weeks in a quick 7 version:

Chris' new job is going extremely well.  He enjoys being back in his element, and it's amazing to me how quickly everything has come back to him.  Not only that, but the fact that he's enjoying what he's doing makes him enjoy everything else so much more too.  So he's not quite the same person at home that he's been for the past 5+ years either.  I cannot begin to express how grateful I am that God has relieved some of the pressure that he's been under all this time and that we are getting that fun, silly Chris back again.  The only negative is that while he's training, he's working a week shift so he's working 4 ten hour days, sort of.  It really comes out to be more like 4 twelve hour days plus the 45 minute drive.  So we don't see much of him Tuesday through Friday.  But even on those days, things are so much better.  God is good.

We've slowed to a crawl for the most part.  The big kids are finishing up their math books.  Bethany and Sarah have done their placement tests for next year, and I'm pleased to say that they've both caught up to where they should be!  John hasn't done his placement test yet, but I'm pretty sure he's almost there.  We're continuing to read together and we started a reading program to help with getting everybody up to grade level with reading.

The girls finished up Girl Scouts with a lovely bridging and awards celebration hosted by our Juniors. We'll take a break from regular meetings over the summer. John participated in a weekend long leadership training for Boy Scouts that he really enjoyed.  Soccer wrapped up with both girls receiving their awards.  Bethany loves the sport and has really started to excel at it.  This was Sarah's first time in several years.  Bless her.  Her coach recognized her for doing everything he asked her to do exactly as he asked her to do it.  Because she did.  Literally.  If he said to guard that spot, she didn't move from that spot.  :-)  But they both had a lot of fun and got a lot of exercise and that's the whole point.

We had a year long membership to Discovery Place, the nearby science center.  It expires this month and we've decided not to renew it, so we took one last trip up this week.  To add to the fun, we were joined by another precious family.  It was tons of fun for everyone and a great way to wrap up our school year.

We've had a round of dentist appointments and allergist appointments.  Poor John had to suffer through a skin test at the allergist.  He said that the worst part of the whole thing, however, was the fact that someone wrote on him.  The child is totally anti-body markings.  It's quite humorous at times.  We also got to have some cavities filled by our dentist (who reminded me that she was in high school when my oldest child was born!  Thanks Dr. Elizabeth!).  Thankfully, my headaches have remained under control, for the most part.  I'm thinking that the last technique - trigger point injections - was the way to go.  I go back again in a few weeks, assuming we've figured out what do about insurance until our new insurance kicks in.

The kids and I continue to read through Narnia.  We have only 2 chapters left in The Silver Chair.  God is amazing.  I have so loved reading through these books with the kids.  In each one I can clearly hear God speaking to me.  With this one it's been the importance of staying in God's word and hiding it in one's heart.  And trusting in God even when we can't see Him or know what the outcome is going to be.  At one point the characters even have to decide to do something rather scary simply because it's what they had been told to do.  We've enjoyed giggling over the silly over the top gloominess of Puddleglum, "There's one good thing about being trapped down here.  It'll save on funeral expenses."  But when he gives it to the witch and stands up for Aslan and Narnia,


Suppose we have only dreamed, or made up, all those things – trees and grass and sun and moon and stars and Aslan himself. Suppose we have. Then all I can say is that, in that case, the made-up things seem a good deal more important than the real ones. Suppose this black pit of a kingdom of yours is the only world. Well, it strikes me as a pretty poor one. And that's a funny thing, when you come to think of it. We're just babies making up a game, if you're right. But four babies playing a game can make a playworld which licks your real world hollow. That's why I'm going to stand by the play-world. I'm on Aslan's side even if there isn't any Aslan to lead it. I'm going to live as like a Narnian as I can even if there isn't any Narnia.

Well, I just had to cheer!  The kids laughed at me, but I think deep down they liked it too.  And it gave us a good opportunity to discuss the fact that we'll encounter those people who think that what we believe is just fantasy.  What do we do with that?

As for myself, I just finished I am Livia by Phyllis T. Smith.  I highly recommend it.  It's a fictional autobiography of Livia Druscilla, the woman that would become the wife of the man history remembers as Caesar Augustus, heir to Julius Caesar.  It tells of his rise to power and her role in that rise from her perspective.  I didn't know very much about the story so it was interesting to me to learn it from this perspective and then go back and relearn it from other historians.

Finally, the weather has jumped over spring pretty much right into summer.  Our temperatures are already soaring into the 90*s.  I'm not complaining, though, after the incredibly cold winter we had.  What was crazy, was a random hail storm that battered us last week causing all sorts of damage and even uprooting trees in our neighborhood.  Thankfully we only suffered some cosmetic damage to our house, but it's left us all a little jumpy every time the sky goes dark.

So, how's life in your neck of the woods?

It has been crazy busy in my world these last few weeks.

I had the blessing of attending a 3 day practicum for Classical Conversations as well as training for tutoring Essentials next year. Right now I'm extremely excited.  Ask me again in a month or two and I may have a different answer.  :-)  Though it did remind me again how very much I love the other moms on our campus and how terrific our director is.

On top of that, we wrapped up our Girl Scout year with a fun bridging ceremony.  And Awana and children's Praise club wrapped up.

Oh, and two weeks ago, my husband started a new job that put him back into his chosen field after 5 1/2 years of waiting on the Lord.  He loves it and I cannot tell you what a blessing it is to see him slide back into that role.  The only downside is that he's working 12 hour days right now and the job is a 45 minute commute.  So, we don't see a lot of him during the week.

With all of that I've been praying and struggling with the idea of what God is calling me to focus on.  What is my area of ministry?  Where should I be spending my time and what needs to go?

Initially, I thought that was just in regard to my hand's on ministry with church and scouts.  But as I sat and listened to our speaker last week at practicum and training, and I found myself away from the computer and not missing it, I began to wonder.  Perhaps my feeling that I "need" to stay on top of this blog is coming from me and not from the Lord.  While I love this outlet for organizing my thoughts and sometimes sharing my opinions on things, I don't know that this is where I need to be focusing my time.

"They" say that to be a successful blogger, you should post a minimum of twice a week.  I get that.  But I'm not interested in posting just for the sake of posting.  And I'm fairly sure that no one is terribly interested in reading another "today, we did math, reading, and history.  The end."  I don't have any strong desire to do reviews.  They take up a lot of time and frankly, I VERY happy with what we're already doing.  I'm glad to tell you all about that, though, if you're interested.

So, with that, I wanted to just be honest and say to anyone who may be reading this (if anyone is reading this) that while I will still probably be posting on Facebook and maybe Twitter fairly regularly, I don't see myself posting here as much.  I may still post various thoughts on things as they come up, but more for me than for any other reason.  If someone else gets something out of it, than praise God.  I just don't think any more than that is the most efficient use of my time.  The video below, which my kids made me for Mother's Day, shows me what I think God says I'm to be focusing on.

I have some pretty amazing kids.